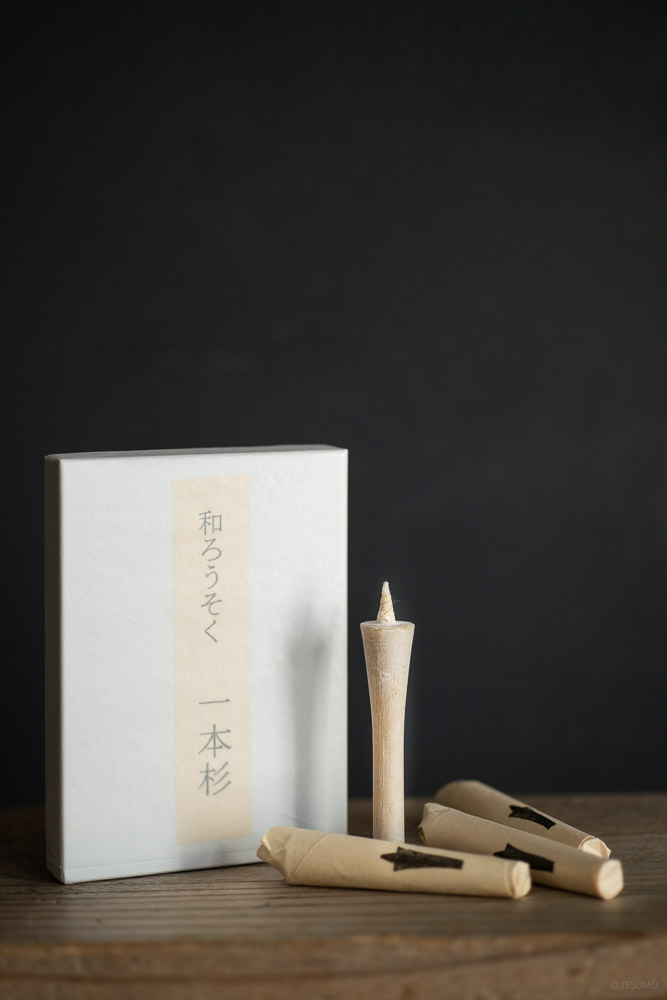 Ipponsugi candles are made of Japanese wax known as Haze, which is cultivated from the fruit of trees. Haze (or sumac) wax has been consistently used in Japanese candles for centuries due to its odourless natural quality and unique sticky consistency that makes its candle burn slowly and it less likely to run when melting.

The origins of its name “Ipponsugi” (translates as one Japanese cedar tree) come from the historical street in Nanao city, Ishikawa prefecture of the same name, where the Takazawa Candle brand resides. Like the street, it is a candle rooted in tradition.

The beautiful tapered “anchor” shape of the Ipponsugi candle catches your eye as it spreads out in a graceful curve towards the sky.

Candles made of Haze (Japanese sumac) wax have a unique stickiness making the melted wax less likely to run during use.

Haze (sumac) wax has been used as a raw material for candles since ancient times in Japan. Production has been decreasing every year, and at present, there are only a few companies making pure Japanese wax candles. Takazawa Candle is known to be one of the finest.

Takazawa Candle continues making efforts to protect the natural environment of the trees they cultivate and to preserve the autumn scenery filled with red-coloured leaves while producing these traditional Japanese wax candles.

Depending on the soil of the Haze tree cultivation area, and the year of wax accumulation, these candles result in a variety of soft colours. The beautiful white powder appearing on the surface of each candle is a reliable proof of the natural material contained within.