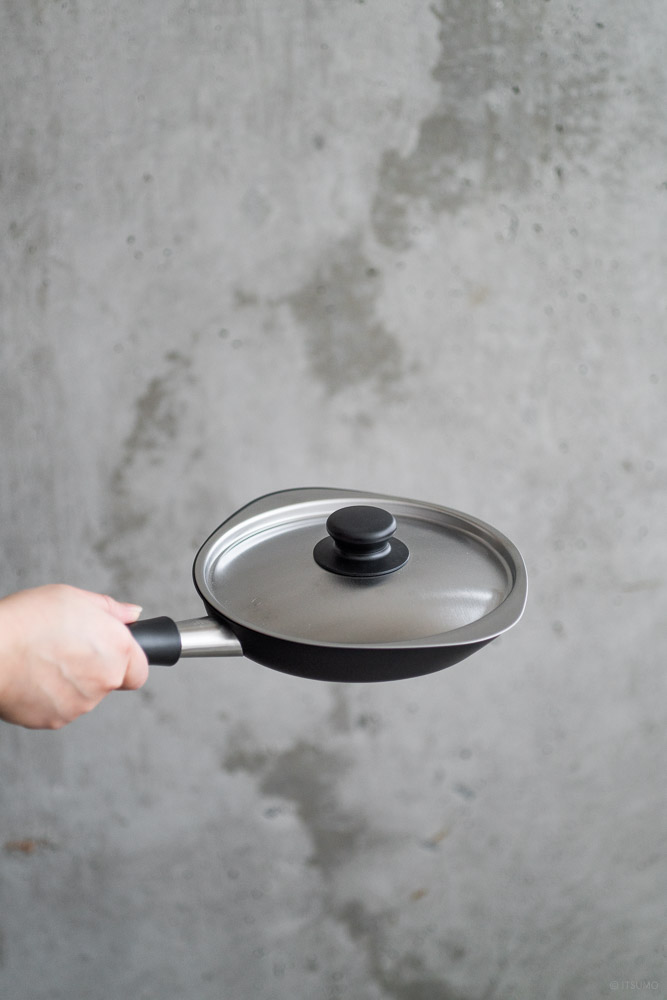 This iron frying pan features a lightweight material with a smooth design that makes cooking easier and neater.

Since it is NOT coated with fluorine, it has the durability unique to iron frying pans. Heat conduction is also better than with ordinary iron pans, allowing food to retain more flavour with a faster cooking time.

The spouts on either side allow for easy transfer of food to serving dishes and containers, while also functioning let out steam and drain excess liquid with just a slight rotation of the stainless-steel lid.

“Magma Plate” is a highly durable and unique material developed in Japan and now used in Sori Yanagi’s line of iron frying pans. The tempered material is carved with concave and convex patterns inside and out similar to cast iron, this construction helps to promote healthy interaction with cooking oil.  The more you use it, it prevents food from burning or sticking to the pan and the less likely it is to rust.

Tolerant to high heat and compatible with both IH and gas stove tops, this high quality pan will help you in the kitchen for many years to come.

1. Each time you use this pan, preheat the pan on low heat and apply oil to the cooking surface before adding food. *Especially for the first few times of use, make sure to apply sufficient amounts of oil.

2. After cooking, hand wash the pan with hot water using a sponge. Do not use soap or harsh detergents.

4. Apply a small amount of vegetable oil inside and outside to season while the pan is still warm.

5. Store in a dry location.

*In order to avoid the formation of rust, food should not be left in a pan after cooking

*Recommended for cooking on low to medium heat.