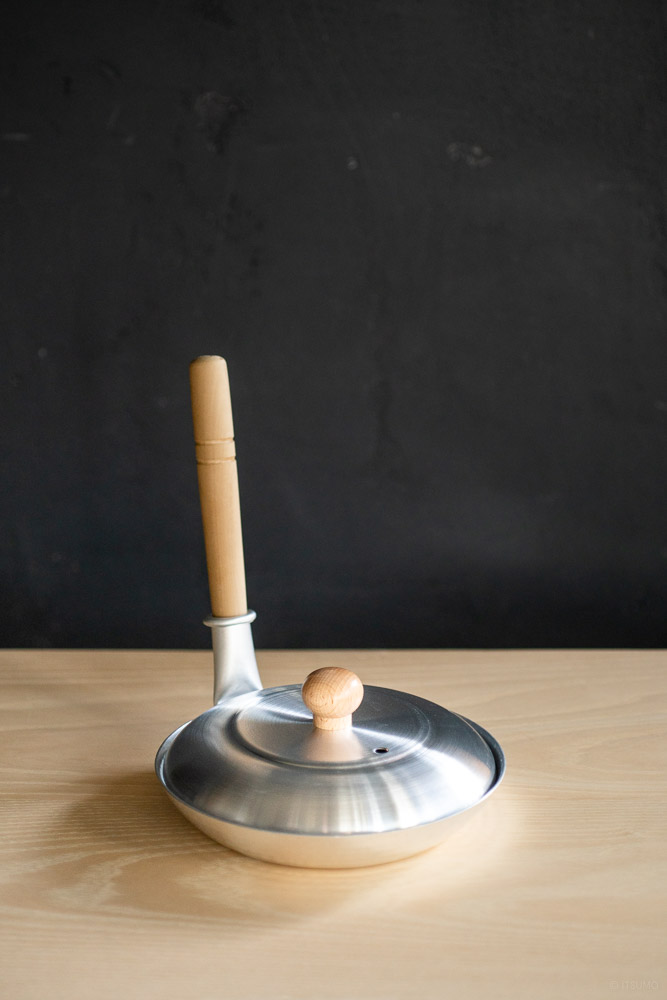 This is a traditional and specialized aluminum pan to cook oyakodon or katsudon (chicken or pork cutlet, with onion and egg over rice).

The size and shape of the oyakodon pan is purposefully designed to perfectly transfer its contents into your favourite donburi bowl. With a normal frying pan, you might get some of the contents spilling out from the sides when trying to slide it directly into the bowl, but the oyakodon pan will eliminate this overflow. The sides are made tall enough to hold your mixture inside, yet low enough that they won’t get in your way when adding ingredients to the pan, or when stirring and pouring. You may also notice the handle stands straight up from the pan, instead of out to the side. Not only does this help conserve space on the stovetop, but it also helps with plating: simply hold the pan over a bowl and tilt the handle towards you for an effortless transfer and spotless presentation.

The aluminum lid designed for use with the oyakodon pan is available separately. Featuring a rounded shape and wooden knob, this lid fits perfectly on top of the curved sides of the pan.

This pan is not intended to be used for fried dishes such as tempura. Do not raise the temperature above 200℃, and avoid pouring water over it to cool it suddenly. Avoid using metal cleaning tools and using acidic or alkaline substances such as vinegar and baking soda.

Do not put in dishwasher, as there is a risk of discolouration and corrosion.