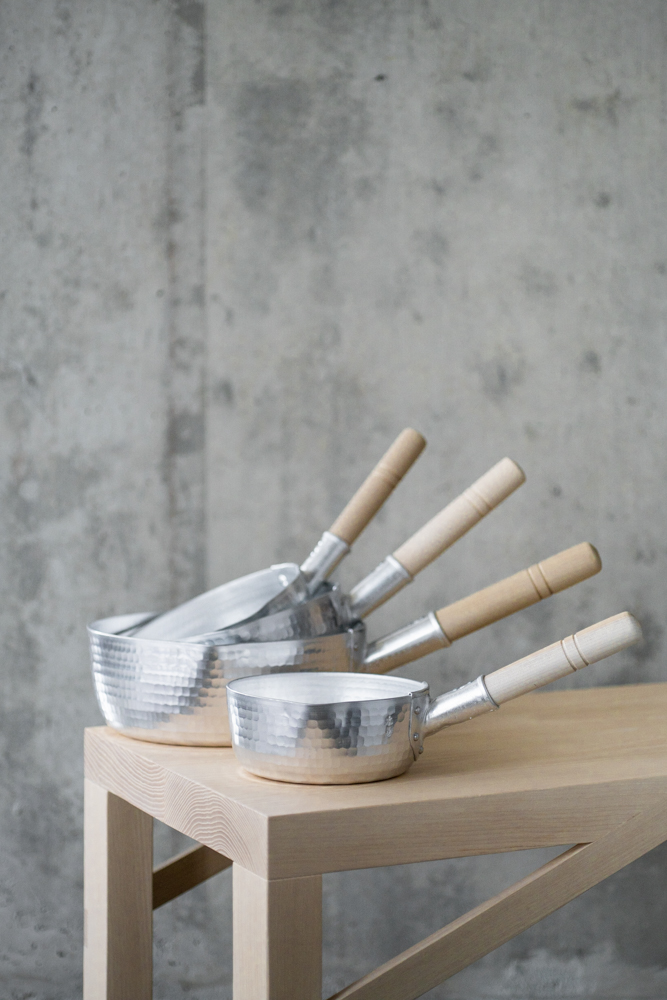 Traditional and most common, this particular type of soup pan with single wooden handle; Yukihira Pot (雪平鍋) is an iconic Japanese kitchen tool, serving many cooking lovers from family homes to professional restaurants. There are two options of material: aluminum or copper. Aluminum is lightweight and easy for daily maintenance. The copper heats up even faster and has the best thermal conductivity. In addition, copper is said to have an anti-bactericidal effect.

Used for boiling ingredients as well as for soups and for stewing and has a wide range of use for all kinds of recipes. A major feature of the Yukihira pot is the unevenly embossed surface achieved by the traditional “uchidashi” hand hammer technique, which gives the pot a larger surface area than one with smooth sides. This helps to conduct and retain heat, while also making it more durable and less susceptible to deforming. Because of this excellent heat retention, it is best to use this pot on a low heat for slowly simmering meals or rice. The lightly curved sides are designed to work in perfect harmony with a round rice scoop or wooden spatula, while the wood handle is convenient for lifting and tilting.

With the extremely functional design and quality made in Japan, it appears very pleasing to the eye and will be a beautiful piece to proudly display in your kitchen, while enjoying your home cooked meals. If you take good care of this item, it will last for a long time! Please follow the care instruction before using for the first time.

*Recommended to use with a matching lid (available separately).

*This Aluminum pan cannot be used with induction heating (IH).

How to use Aluminum pot

Since aluminum gets discoloured, please follow this procedure to prevent the discolouration.

1. Wash it with water before using.

2. Put rice water, that has been used to wash the rice, in a pan, (or put waste of vegetables and water in the pan), and boil it about 10minutes. This has the effect of preventing discoloration inside the pot.

3. Throw away the water in the pan, and wash it only with water and a soft sponge, and dry it.

[If your pan became dark…]

It is no harm to the human body, so you can continue to use it. Follow how to clean the discolouration.

1. Put lemon and water in the pot, and boil it about 15minutes. Add one lemon slice per one liter of water.

2. If it is still not completely cleaned, please clean it with the cleanser or Tawashi scrub brush.

*This Aluminum pan cannot be used with induction heating (IH).